2019 is lining up to be a great year in book releases with a couple debuts, some final books in series and more that I can’t wait to get my little paws on. I’ve read all the 2018 releases I was interested in, and ended up being released. These posts seem to be my good luck charm when it comes to follow-through. So, in order of release date… 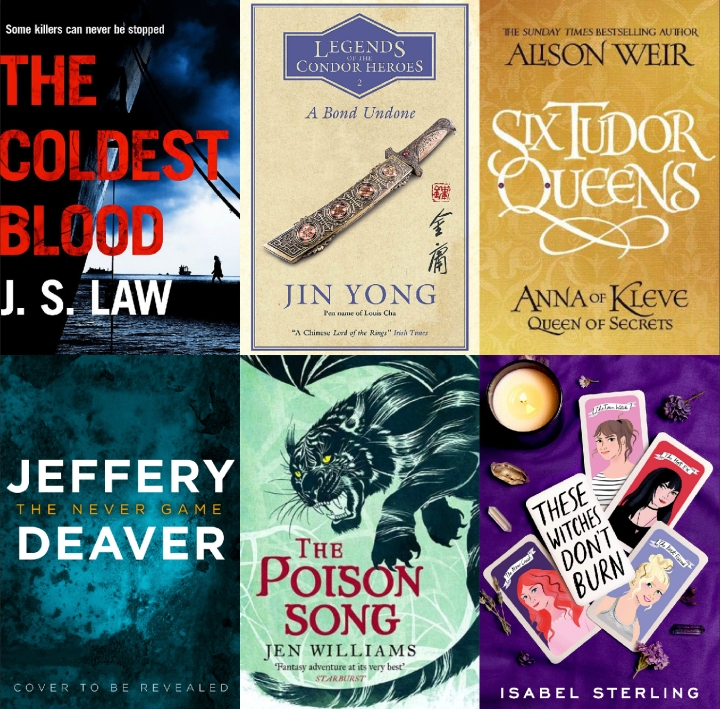 The Coldest Blood by J.S. Law
This is the final in the Lieutenant Danielle Lewis trilogy that started with Tenacity (now called The Dark Beneath) which I loved. I didn’t like the second book, The Fear Within, as much. But I have high hopes for the final book and I’m really excited to find out how the story ends.
Release date: 24th January

A Bond Undone by Jin Yong
I’ll admit, I haven’t got very far into the first book in this series; A Hero Born, but the little bit I have read and the fame of this series has me convinced I will enjoy it enough to want the second book. They’re releasing one book a year of this twelve book series as they translate which is torturous though, I’ll be 36 by the conclusion!
Release date: 24th January

Six Tudor Queens: Anna of Kleve, Queen of Secrets by Alison Weir
Y’all know I adore this series and have done since the first book! I’m so so excited about the Anna of Kleve instalment as she’s one of the few who went on after Henry VIII to live- and live a life that I know almost nothing about.
Release date: 2nd May

The Never Game by Jeffery Deaver
Jeffery Deaver is my favourite crime writer. And finding out that he was starting a new series with a new main character? I need it. He’s a ‘reward-seeker’, rather than a detective and it focuses in on the video-gaming industry. The whole thing just sounds like it’s going to be a good read.
Although I’d love another Kathryn Dance book…
Release date: 16th May

The Poison Song by Jen Williams
If there’s one author whose work I fell in love with in 2018, it’s Jen Williams. The Ninth Rain was incredible. The Poison Song is the final book in the Winnowing Flame trilogy and I’m waiting as long as I can to read the second book so that the wait isn’t so terrible!
Release date: 16th May

These Witches Don’t Burn by Isabel Sterling
If there’s a combination I’ve never been more interested in, it’s witches and LGBTQ+ characters. This is a debut, part-mystery, part-romance, that I can’t wait to get in my hands.
Release date: 28th May

Missing Person by Sarah Lotz
This was originally going to be released in March 2018 and I was really excited for it earlier this year. Almost 12 months hasn’t dimmed that excitement, Sarah Lotz writes some great books like The Three and I’m looking forward to what she does next.
Release date: 25th July


What books are you looking forward to in 2019?