One of the goals I had in 2018 was to buy less books. I wanted to continue the ten-out, one-in thing that I did in 2017 but ended up unhauling only 30 books (here, here and here) and buying 16. Ah well! That’s still a net-loss, right? I totally gave up on it all this year and I’ve already bought ten books so I don’t think a yearly haul will do for 2019. Let’s not think about that, and instead…

I picked up Date With Death by Julia Chapman at a small independent bookstore because it looked so dang cosy and cute! I actually read this a couple weeks ago and it wasn’t my favourite but I have to buy a book whenever I go into a small bookstore!

A slightly less moral purchase was Ink and Bone and Ash and Quill by Rachel Caine. They both went on sale for £1 on Amazon a couple of months ago and this series has been on my radar for a while so I picked them up. I might not get around to them soon but as a student on a limited budget? A must-buy!

I started listening to a new podcast, Shedunnit, and Dorothy L. Sayers gets mentioned a lot so when I saw a collection of the first three books in her series; Whose Body?, Clouds of Witness and Unnatural Death, for £5.99 on The Book People? I had to!

Face Off by Brenda Novak and Magisterium: The Golden Tower by Holly Black and Cassandra Clare are both series I started reading because I was sent the first couple books by publicists and continued on to buy the rest myself because I loved them so much! I read both of these in 2018 and I really loved both of them.

Kitty Steals the Show, Kitty Rocks the House, Kitty in the Underworld, Low Midnight and Kitty Saves the World by Carrie Vaughn are all the Kitty Norville books I have left to finish the series which I started reading in March 2014! I read three out of five in 2018 and I’m so close to the end, I can practically taste it! The UK publisher doesn’t have rights for the last four books, so I had to import the last four and my bookshelf is much less aesthetic now. 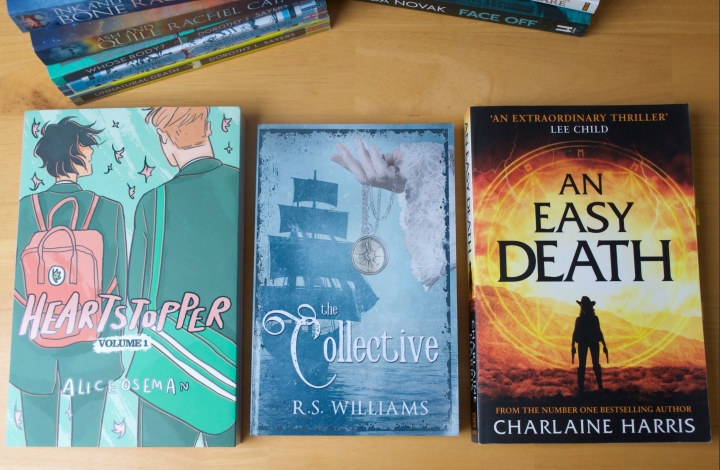 I was one of 1576 backers of Heartstopper by Alice Oseman on Kickstarter and it’s now being published by Hodder! Plus, you can still read it for free online. I think Heartstopper is great but I don’t think the art translates as well in print.

Rhianne is an incredible blogger who writes about writing so I picked up her first novel; The Collective as she has really helped me become a better writer. I’m a terrible reader though and haven’t got around to this yet but it’s on my ASAP-TBR, especially with the second book in the series now out.

Charlaine Harris is my favourite author so I, of course, had to pick up An Easy Death. It’s her new series and while the first book didn’t really blow me away, she’s my ride-or-die author and I’ll be continuing the series.

Have you read any of these? What did you think?